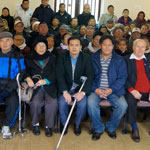 Joanna Lumley sends all her love and support for the pioneer work that is being done by the Gurkha Peace Foundation.’ Joanna was in Scotland but her message was delivered to a packed hall by Peter Carroll who said how proud he was to be involved with the Gurkha Community. He stated that there were still some battles to be fought but if the Gurkhas stayed united they would win.

Well over a hundred Gurkhas and their wives, families and civic guests gathered into the St Francis Church Hall, Ashford to celebrate the opening of the new day centre which will be open each Thursday.

Wives and daughters of the Gurkhas gave a traditional Nepalese welcome to Father Anthony and his church community as well as civic leaders as they entered the hall and were handed mulled wine before being seated. The Mayor of Ashford, Bob Robertson, was accompanied by the Mayoress and after speaking invited questions from the audience. Councillor Pat Todd who has been twice the Lord Mayor of Canterbury and is the father of a Gurkha officer presently serving in Afghanistan gave a supporting speech and much of what was said in English was translated into Nepalese by Kalpana a teenage girl. Other civic guests included County Councillor George Koowaree and his wife and Chris Took and Lynne Carroll.

Father Anthony said a prayer for peace and a blessing for the work of the Gurkha Peace Foundation and Brian Staley praised the work that his fellow trustees were doing. Prem and Bhim had led an efficient and hard working team to prepare the success of the celebration and had worked diligently to bring about the popular day centre. Fifty mostly elderly Gurkhas and their wives had attended the first day centre and eighty five came on the second day. Piped Nepalese TV was watched which kept the community in touch with Nepal, Soon they will have Skype linking with village centres in Nepal and a live web-site plus a quarterly electronic news letter will be sent to everyone who subscribes to the charity by standing order.

Gopal Giri, the ex sergeant major plans to have a similar drop in centre for Folkestone and has introduced a kindred sergeant major who has offered assistance with IT. Meanwhile comprehensive advice is readily available each and every Thursday.